Welcome to A Twisted Rail

Greetings! It is funny how small things in your life grow in meaning over time. When John and I made the first moves towards professional independence and the establishment of d-wise, the year was 2002, just after the 9/11 attacks. Over the ensuing years, as the company has grown, I have resisted the call to Blog in the firm belief that yet another voice contributing to the internet clamor is futile and presumptuous. But many things have changed since then. d-wise has grown to be a respected company in the Life Sciences technology market. We have hired a VP of marketing who is dogged in pursuing me to write (yes, Mike, you made the initial post). COVID 19 - and all that goes with it (including writing this piece from my back porch in the North Carolina heat). And personally, the loss of a friend and mentor in my father-in-law, whom I cared for a great deal. This loss is ultimately both the genesis and impetus of this series and the title.

You see, my father-in-law, Joe, was an uber-activator. He was relentless in starting and finishing home projects. He quite simply could not sit quietly and be still. I used to watch him get wound up working on a project and then ask him why he was doing what he was doing, as it was clear that he was irate. He would curse and yell, “so it’s DONE!” I would think about the obvious – if you don’t start the job in the first place, then you do not have to finish it - especially when the task at hand was not critical. But he was not wired that way. Over the years, I came to learn that my father-in-law did these things because it was his way of giving back and performing service for his community. He could not stop himself from working on these projects if he wanted to – they were his communion and his primary lifeline to the people that had meaning in his life (and also to some that did not).

And so, what does any of this have to do with a technology blog? As I sit here on my back porch, I am looking over a project that Joe helped us complete some years ago. He helped me and my wife add a roof over our back deck even though he was recently six months on the other side of a quadruple bypass. With his help, we were able to enhance our home for little cost, and I learned a great deal from him and the experience. There was only one issue I had with the project – the railing. By then end of the project, he was so tired and angry that he slapped on a very warped 2x6 to use as the rail. To fix this would have required a trip to the local lumberyard, but this would be at odds with the primary goal – DONE. After completion, I stood looking at the rail, wondering what in the world had transpired. Later, I promised myself and my wife that I would replace it. But I never did. Ultimately, replacing it would have been to call into question his gift, and he would likely notice. So I left it.

Over the years, the rail has grown to mean a variety of things to me, some germaine to our industry, and others not. It was an act of kindness and service. And it is twisted and imperfect, but it’s done. And a roof exists where there was none before. Ultimately, it’s not a question of perfection and whether or not a more precise version of the rail exists. It was a gift. It is also a template for this Blog - a twisted and imperfect discussion on technology that hopefully someone derives some benefit from. Because in the end, all of us have something to give. The format of the offering will fluctuate – perhaps some guest authors, perhaps some videos, but it will be honest and true to the original gift that inspired it. Perhaps that will be enough.

And with that said, welcome to the Blog! And for those wondering where the tech is (and in the spirit of Dilbert): Kubernetes. 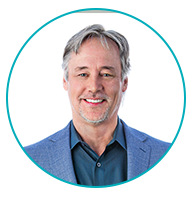